Bennett’s work has always been grounded in her past experiences, informed most notably by a childhood spent between the languid humidity and dazzling colours of India and Burma, where her father held military and diplomatic posts, and the regimented froideur of English boarding schools in winter. Perhaps unsurprisingly, the sensual attractions of her Asian summer holidays won out, leaving an indelible imprint on her creativity. Even now she retains vivid bodily memories of her youth — of walking barefoot over the black and white marble tiles surrounding Burmese temples and registering their contrasting temperatures; of savouring the astringent zing of nimbo pani lime drinks and the taste and texture of a certain kind of Burmese dumpling. This Proustian archive ultimately found expression in her work as an artist, first in performance pieces and later in her painting. Aware of her own body as a store of aesthetic memories, she placed it at the centre of her creative project.

Much of Bennett’s earlier work focused on the female form placed in a variety of guises and scenarios. The self-reflexive work of American photographer Cindy Sherman and of the Mexican painter Frida Kahlo made a deep impression on her.  Her early acrylics were of women in army uniform, while a later series — of women as wild animals armed with weapons and crouching in the jungle — were made using liquid latex. Over time her work became increasingly linear, revealing her ability to capture with elegant economy the sensual and at times erotically charged outline of the female form. The prints from these series won her legions of admirers. She now works with household gloss paint on super-glossy lacquered aluminium — an exacting medium — and in this body of work her focus has expanded. The female body now functions as a compositional armature against which to juxtapose imagery derived from studies of the body’s interior and from other organic sources.

During study visits to make drawings at the Botanical Gardens at Kew, Bennett discovered the uncanny morphological similarities between plant forms and the occasionally florid structures of the body’s internal organs. It proved an exhilarating discovery which triggered a change in her painting.

The switch in register — creating a balance between line and colour — proved liberating in more ways than one. The outcome of that process is a a series of works rich in enigmatic patterning, executed using bold colour combinations. Tubular, colonic shapes elide with what look like stylised fallopian tubes; fractal borders between lakes of contrasting colours switch between figure and ground and back again. That dream-like visual interchange is one of the most rewarding aspects of this series. The eye begins to trace the outline of a petal that abruptly morphs into a female breast; a cloud blooms into a row of nipples or teats, a frond of something akin to seaweed takes on the meandering undulations of an intestine-like tube alongside shapes reminiscent of blood cells.

Many of these paintings began as drawings and collages inspired by her visits to Kew, which in turn led her towards the work of the nineteenth-century German botanist and naturalist Ernst Haeckel. Haeckel’s Art Forms in Nature provided a source book that illuminated the structural similarities between plant forms and human organs. She pursued those correspondences back towards the female body using her unerring instinct for the drawn outline to bring the two visual cultures together. The imagery is visceral and vaguely hallucinogenic.

Underpinning the project is a post-Pop sensibility that delivers a strong graphic punch. This really comes into its own through her use of gloss paint on aluminium which, though painstaking and time-consuming to execute (and fraught with risk), nevertheless lends the works a physicality that would have been lost to more conventional painterly approaches. Her insertion here and there of a Lichtenstein-like drip motif seems like a witty comment on the dribbling viscosity of her chosen medium. Nor is she afraid to leave some areas of the brushed aluminium support unpainted, which adds a luxurious contrast to the adjacent fields of colour. Coriander print studio have worked with her to their usual exacting standard to produce a superb series of associated prints that reproduces those unpainted areas with great fidelity. 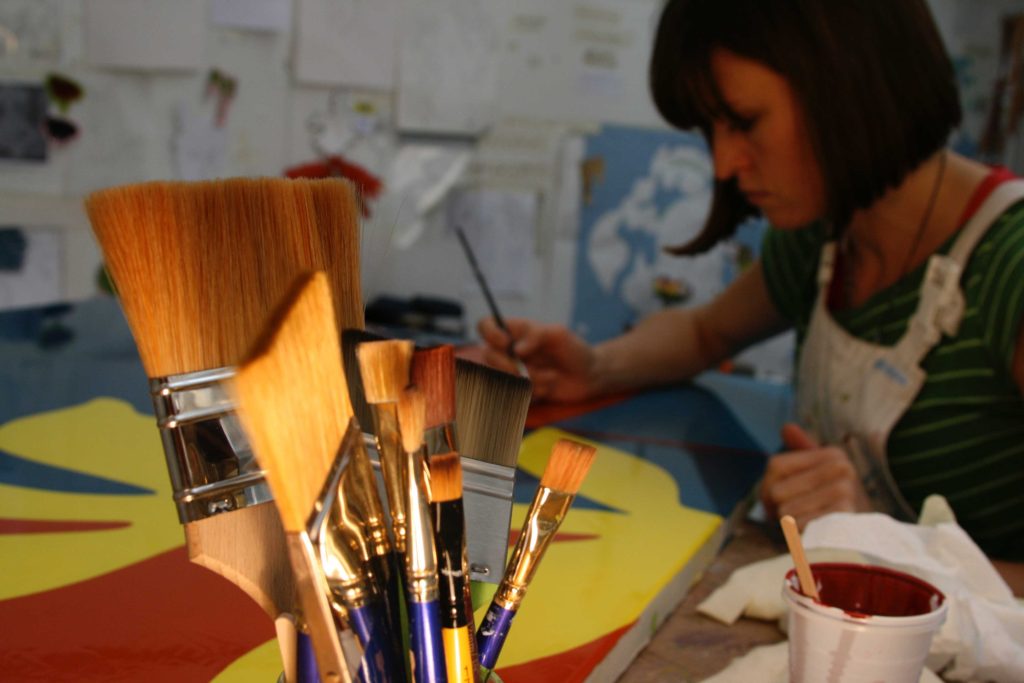 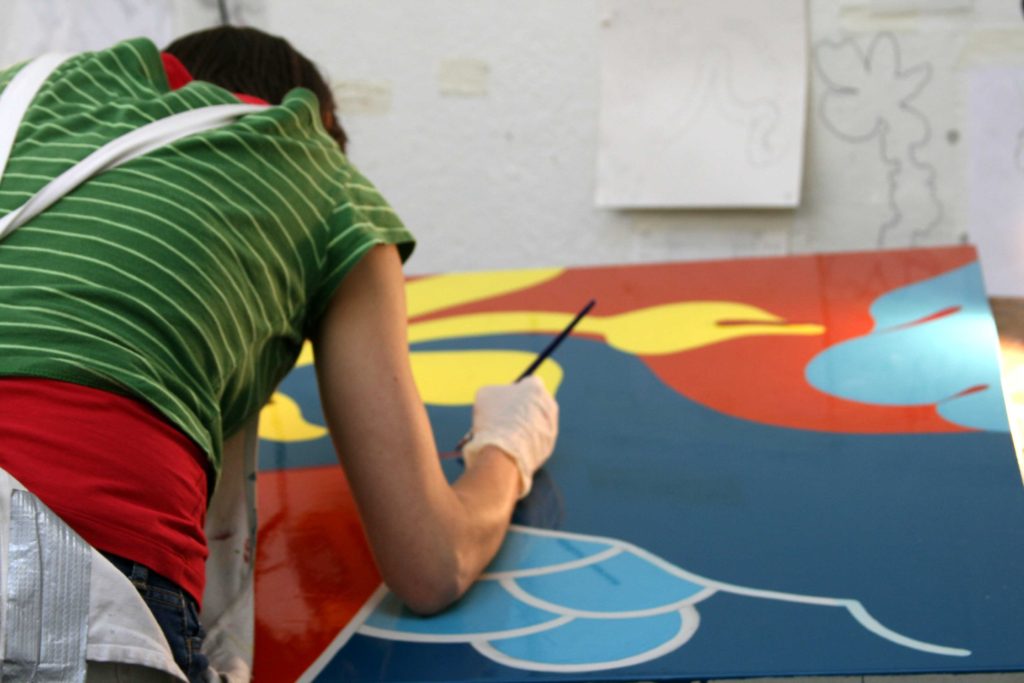 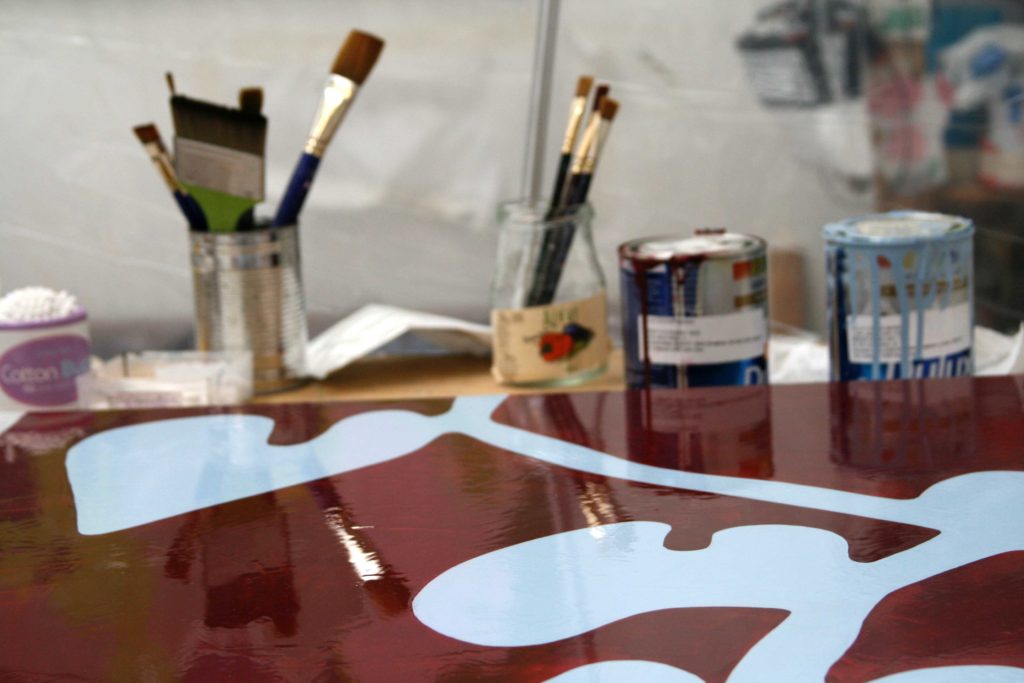 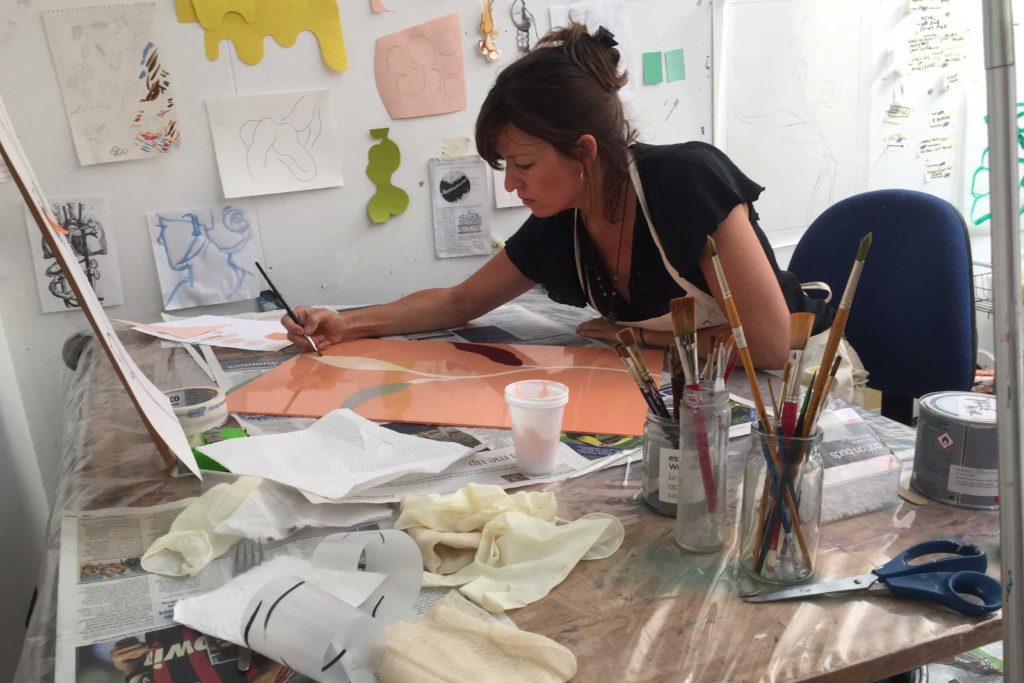